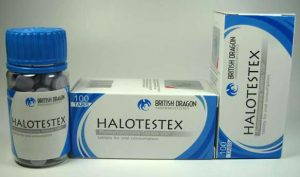 HaloteX (fluoxymesterone) is an anabolic and androgenic steroid. Available in tablet form. Most often, halotestin is used to increase aggression, muscular density and strength without gaining muscle mass. Halotestin is popular among athletes who adhere to a certain weight category, as well as representatives of endurance species. Despite the sufficient distribution of the means, the mechanism of its operation has not been fully investigated so far. At the moment, the main version assumes a non-receptor effect.

The steroid profile of HaloteX

In its chemical structure, HaloteX has similarities with methyltestosterone, but approximately five times more potent than the latter. Fluoxymesterone is a chemically modified testosterone in three positions: