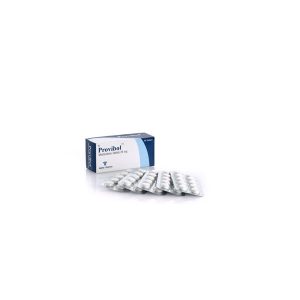 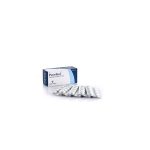 Provibol is composed of 25 mg of mesterolone per tablet. This is not an anabolic but a very powerful anti-estrogen. Preventing gynecomastia while reducing water retention and fat, it allows the recovery of testosterone production in the testicles, preventing aromatization.

Provibol acts as an anti-aromatic: it prevents the aromatization (conversion) of anabolic steroids into estrogen. It avoids gynecomastia and can be combined with Nolvadex to increase its effectiveness. It is indeed clear that Provibol and Nolvadex are both anti-estrogens whose mechanisms of action are different and complementary, and that’s why the combination of these two products is so effective: while Provibol prevents aromatization of anabolics, Nolvadex blocks the estrogen receptor cells, preventing them from acting. It is therefore a formidable tandem.

Provibol is not only an excellent anti-estrogen : Maintaining a low level of estrogen, Provibol also reduces water retention. It gives the user the ripped look sought by many bodybuilders, especially when preparing for competitions.

It should be noted that Provibol tends to limit muscle gains due to a steroid cycle since it attaches to androgen receptor cells instead of other steroids in the body, which are then blocked out and therefore ineffective. This is why many bodybuilders take a minimal dose of Provibol, just to avoid gynecomastia.

Regarding the side effects of mesterolone, they are rare below 100 mg per day. Indeed, tablets of Provibol are not alpha-alkylated 17 and create no harm to the liver. But if we start to exceed the 75 to 100 mg daily, frequently emerging phenomena such as priapism (painful situation in which the penis after erection does not regain its normal flaccidity) in men or virilization in women.